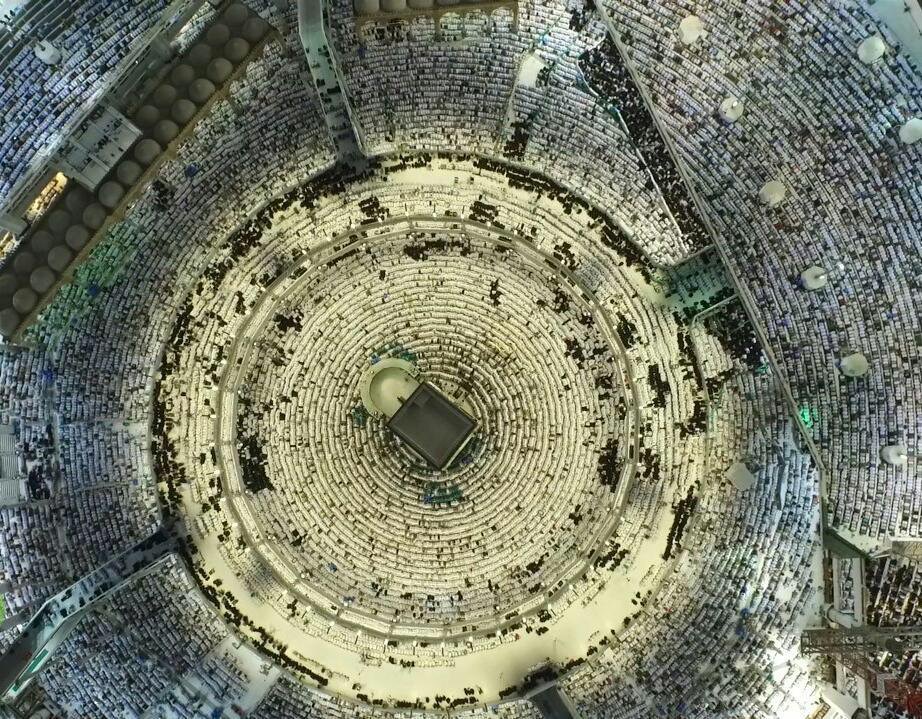 One need only to see an aerial view of the Ka’aba in Makkah with Muslim pilgrims circling the central shrine in tawaf to recall how central the circle is in Islam. This is in effect the center of the Islamic world, and in a form of worship, the pilgrims or Hojjaj must circle it, thus also participating in the making of a circle. Now we recall that the architecture of the Quran is also circle-based, one could even say in three dimensions as in the shell of a chambered nautilus. But the scope of this discussion is so far reaching, the symbolism contained in Quranic architecture so profound, it may be more enlightening to include more graphics to do justice to the idea of dynamic symmetry in relationship to cycles, returning (to our Creator Allah), the creation, the divine Message itself, and last but not least (as you shall see in the Quran), us.

The significance of this is evident in the Quran, in the frequent examples of cycles in life and in the creation overall.

How can you be in denial of Allah when you were dead and He made you alive, then He makes you die, then He brings you to life, then to Him you return?

The life cycle in the Quran is not merely life and death, but begins and ends with Allah, who created us when we were nonexistent (hence “dead”), thus making us alive, then we die as mortals, then finally we are revived (brought to life again) and return to Him. Once the circle of life has been activated by Allah creating us, we go through death, but are returned again to life. Belief in an actual physical resurrection is a basic tenet of Islam, the completion of the cycle of life, ending with life in return to our Creator. But this does not mean that we will return unchanged. On the contrary.

14:48 The Day the earth is replaced with another earth, as are the heavens, and they will appear before God, the One, the Supreme.

Here indeed “resurrection” does not mean coming back unchanged. Humans are not exempt, of course. It goes without saying that in the matter of Judgment Day, people will face either reward or punishment according to Allah’s just determination, and in either case will become either unimaginably better or worse than they were in this life. Their resurrection will not be rebirth as who they were, but a new life based on what they did on this earthly life.

20:124 And whoever turns away from My remembrance, then he will have a miserable life, and We will raise him blind on the Day of Resurrection.”.
20:125 He said: “My Lord, why have you  raised me blind while I used to be able to see?”
20:126 He said: “It was the same when Our revelations came to you, you forgot them, and similarly today you will be forgotten.”

This shows how the return to Allah will be indeed physical, but not in the same way or in the same body and circumstances as in this earthly life. Above is an example of how one’s deeds and attitude in this life affect one’s return in the next, the Hereafter, in this case, for the worse. But for the faithful people who put their faith and goodwill into action, the Hereafter would be far better. The Quran describes that completely opposite consequence highlighting the improved circumstances for the faithful recipients.

5. As for the pious, they will drink from a cup with the scent of musk. 6. A spring from which the servants of God drink, it gushes forth abundantly.

12. And He rewarded them for their patience with paradise and silk. 13.   They are reclining in it on raised couches, they do not have in it excessive sun nor bitter cold. 14.  And the shade is close upon them, and fruit is hanging low within reach.

The word for “paradise” in Arabic, Janna,  “garden.” Which represents a place of growth, life, and sustenance, a place with which one can organically symbiotically interact, full of light and beauty. A garden is also cultivated with the goal of beauty and fulfillment, as opposed to acting as an opposing or difficult place. It is the ultimate “home.”

Those whose earthly life was spent doing harm and intentional evil, who rejected compassion and faith, face a Hereafter whose consequence is characterized by fire, a place of rejection and destruction, the two main forces of their earthly “test” life.

“Were these not the ones whom you swore Allah would not grant them of His mercy?” Enter the Paradise, there is no fear for you nor will you grieve.

This is a return indeed, but a transformative, dynamic, one, in which the consequences of one’s first earthly life translate into a final outcome. Note that the spiral shape in three dimensions can be viewed from different angles: a cutaway view such as the nautilus shell below gives us a “blueprint”-style look at the overall design. This is like looking at the hurricane from above it or the galaxies “head-on” as if directly above, as opposed to on their sides, or a planar/ side view. When one imagines the nautilus shell as seen from its side, the full three dimensions become evident but one cannot see the inside design (like seeing a building instead of its blueprint).

Note the outside view shows us how the 3-D spiral comes to an endpoint. This graphically illustrates how the life-force (an “energy” or dynamic in the 3-D spiral, univalve shell, shape) comes to a finality, the “point” at the end. This is the same endpoint represented in the “blueprint” view as the center. But it can also represent, in a sense, the ultimate “return”, Al-Akhira, the Hereafter or Finality. This could also be thought of as when time does not exist, that is eternity, the “eye”. Time is like the circle, the circling. In the center is “all time”, or eternity. In the case of the Hajj  (pilgrimage to Makkah), we circle in time (like the hands on an analog clock) around a focal point of worship which is a center that does not move, symbolic of Allah Al-Samad “the Eternal Indivisible/ “rock”/enduring. It also represents a final place. As one approaches the endpoint of this life in our circling through it, what that endpoint will be depends on how we lived our lives, whether we kept that Finality in mind as a reality.

The architecture and its symbolic significance is more complex than a circle, being three-dimensional. But it is a sign among signs, in the Quran, in the natural world of creation, and in ourselves.

In the creation of the heavens and the earth, and the difference between the night and the day, are signs—ayat—for those who possess intelligence.

In the heavens and the earth are “signs” with all the meaning of that word: evidence and signposts, miracles and indications of a truth. We are repeatedly enjoined in the Quran to study these signs and think about them.

In the heavens, spirals are great signs with a familiar shape. 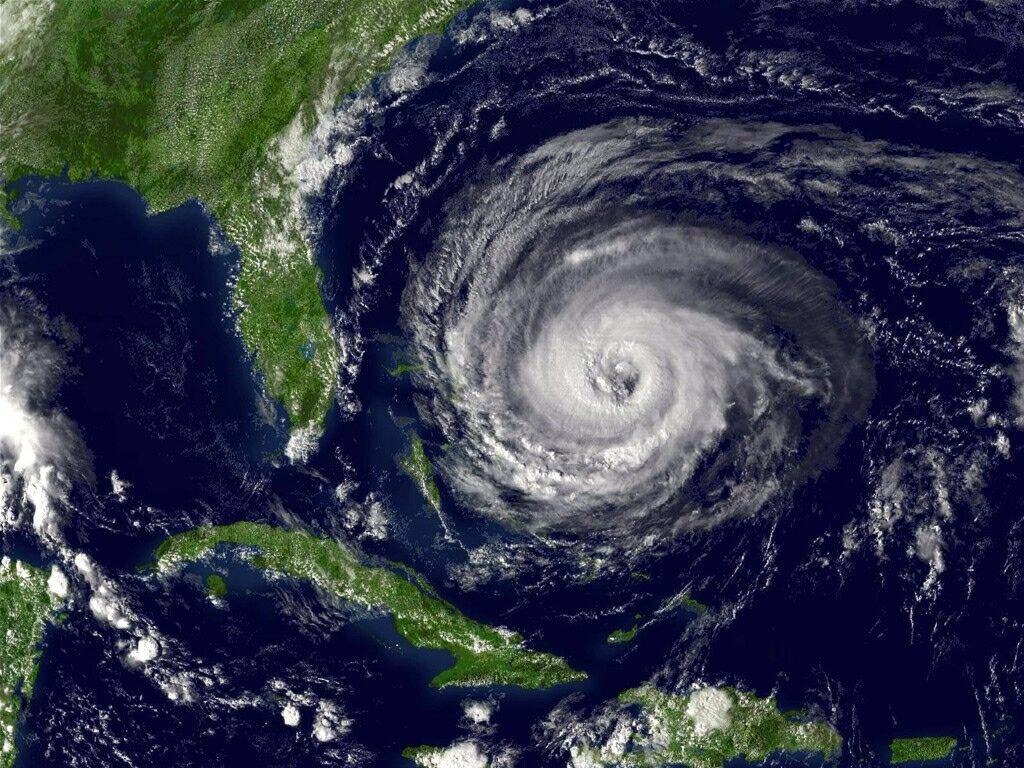 On earth, the cyclone/ hurricane spiral reminds one of galaxies. The chambered nautilus shell, whose dwelling place is the ocean, forms a similar spiral shape.

Even in plants or other living things, we find a recognizable pattern or “sign.”

Even in our own bodies these signs can be found.

There are many explanations for these spirals found in creation. What we are concerned with here is not with spirals as natural phenomena per se, but with this common element in the natural world, in the “architecture” of created things, as a sign of deeper meaning as to our relationship to the Creator Himself (swt) and our purpose and place in light of that. What has been called dynamic symmetry, a term first coined by Plato, in reference to nature, is not only a noticeable design characteristic of the natural world, not only a “sacred geometry” although it most certainly is that, but is also importantly a reality-based concept, found in the idea of yin and yang, and also in the dynamic aspects of the meanings of Allah’s great pair of names: Al-Rahman, Al-Raheem. This is in a sense the crucible of creation. But according to the Quran, creation begins as a word: Be! (In Arabic, Kun!)

So referring back to the importance of language — recalling that what distinguished Adam and his descendants from the angels was, and is, language, mentioned in the Quran as “names” for things — we have the final message, the Quran, whose architecture fits the analog design of dynamic symmetry, the spiral pattern so significantly observed in nature, bringing us a message whose very form as well as content reflects its divine source.

What interests us here is that the architecture of the Creator’s final revelation, reflecting the pattern found in creation, brings to our intellectual capacity, our ability to understand, the message of Who our Creator really is, what He is like, and what in turn our relationship to Him is and can be. The Quran, it’s important to note, is not a part of “nature” but rather a message from Allah Himself in, as the Quran frequently mentions, the Arabic language. And that message in human words contains many signs or indications of its divine origin which people of faith and understanding continue to discover. These signs can bring to humankind a sense of wonder and open our eyes to what deeper meaning lies in our very lives and existence, indeed in the whole of creation surrounding us. The sense of wonder brings us closer to the Most Wondrous, and gives us greater appreciation of Him, and if all goes well with our hearts, fills our hearts with praise and adoration for no less than the Almighty, the Exalted.

And in the center of the Quran, as pictured in the “blueprint/ nautilus” view (and at the end in book format), a message whose greater purpose is to bring us a greater understanding and appreciation of Allah,  is the Sura 114 entitled Al-Nass or “People.” Us. Surely Allah wants us to ponder the significance of that, too. Would the Almighty, the All-Merciful not also want His worshippers to be the best and highest of creation? Not perfect, but with our intellect and hearts truly and passionately engaged in a life of sacrifice, compassion, worship, and of course, wonder. And if, with our focus on the Finality and return to Allah, we can become fulfilled as human in the highest sense—not destroyed in a state of never-becoming and agony, but with the beauty and joy of fulfillment — which is as fully realized worshippers and people, accepted as worthy of vision, light and the ultimate joy: to be in the radiant Presence and Face of Allah the Magnificent Lord of Mercy.